According to the Athletic, Rams cornerback Jalen Ramsey drove to USC last week to pick up a pair of yellow tights that some Trojan players are wearing for games. Ramsey was originally committed to USC before he switchd to Florida State.

Frankly, I think the yellow tights are awful on USC and the Rams. 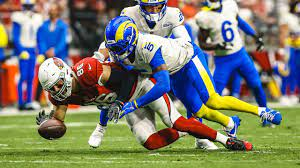 So it’s a good excuse for me to mention his father, Rex Moore, and his most famous moment as a Trojan.

Moore (35) threw mud through the face mask of Notre Dame tailback Allen Pinkett during the 1984 game at the Coliseum, which was played in a horrible rainstorm.

“Never happened,” Moore said. “If the refs didn’t call it, it never happened. I wanted to do everything to make this guy (Pinkett) unhappy — and I knew I could get away with it.

27 thoughts on “Yellow Fever Is Spreading”